Learning to write, instead of an educational dysgraphia

Handwriting is the art of drawing. In the ancient Chinese culture, poets were also masters in handwriting. Steve Jobs, unhappy with his university's course offering, made sure to sign up for a calligraphy class. Prior to our computerized age, handwriting lessons were the study of the how to illustrate letters and their combinations in a legible, and beautiful, manner. From his calligraphy class, Steve Jobs was inspired to create a way to translate what is handwritten in to the information age, and changed history with a program called “Word”, which we all now use daily.

What's more, any adult today will remember the frustration of the pharmacist in trying to make out the illegible doctor's handwriting of written prescriptions. These anecdotes bring up two very important points to keep in mind:

1. the study and art of handwriting, for a mind like Steve Jobs', was a source of creativity and a way to illustrate his thoughts, which then lead to the development of other artistic pursuits, known for their visual and esthetic importance.

2. it's important to recognize that no one would have dreamed of considering those doctors as having an “illness”, based on an irritated pharmacist's complaint!

Handwriting requires a great deal of practice for the hand, and today, with so many school subjects to study, no one dedicates the sufficient amount of time to the cognitive training for the hands and body necessary to form written characters. It requires time and patience, that today's world doesn't extend to anyone.

As adults, we must hold ourselves accountable for some part of this. If we are always rushing, if we do things in a surface manner or just to be passably good enough, in every area and field, we have no right to blame today's child for not being the child of 40 years ago, who spent hours diligently and painstakingly embellishing his letters. We adults are hardly behaving, or teaching, as we did 40 years ago. Those dedicated to the study and research of pedagogy are almost extinct.  What we see in our children is the most blatant consequence of how we adults behave: when they are 2 years old we expect them to act 40, because we don't have time to dedicate to their upbringing, we're constantly running, running, running. But, at the same time, we're aware that they aren't getting something we had, which has created a dire whirlwind of confusion—declaring them “ill”, wanting to believe that there could be such a thing as learning without actually teaching. These are mirages in the desert, hallucinations, all we do then is make things worse. We create a society of people declared “ill”, which does no good to anyone—to neither our youth nor to us—because they are our future.

Perhaps we should admit that sometimes we can't even read the notes we've written to ourselves?

So, then, we must recognize that we are hurried and not taught well. Let's admit that, and that therefore this is not a “disease”, and that there are no quick shortcuts in the time necessary to learn.

Should our youth be educated? Let's agree to how. If handwriting is no longer relevant in our computer age, we could do away with it. But let's declare that across the board, and quit calling problems with it an illness or a disorder or some sort of never-proven “neuroabnormality”. Or we can decide, rather, that it is important. And in that case dedicate to its instruction the adequate amount of time and care necessary, so that it is done well. 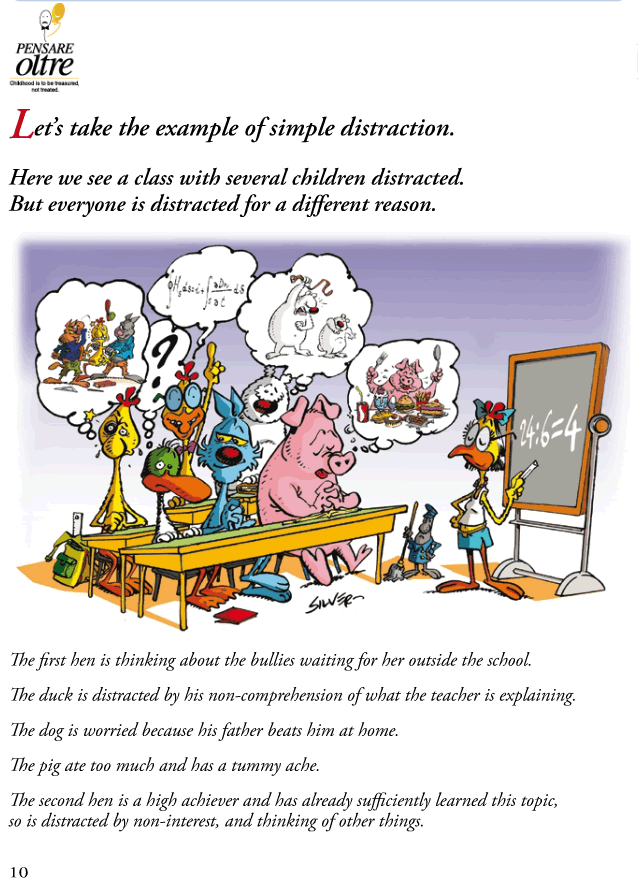 The consensus in the field of psychopedagogy over the past 30 years was that it was better not to force children, but rather to leave them free to express themselves in their reading and writing education, that they should be left alone to copy letter shapes without methodology, and without correcting their penmanship or process of learning cursive, and to correct only their spelling mistakes. It is just this approach which is responsible or the state of things, today.

Parents and teachers report of evermore children with messy, uneven, uncontrolled, illegible writing, and of children who don't know how to grip the pen correctly, resulting in tired hands, or not being able to see what they are writing.

There is resistance to recognize the fact that writing is a type of code.  A code which needs to be taught with method and technique, and in order to be shared by all, it must be in a form recognizable by all—a form which is anything but happenstance.

This is the case for handwriting in all languages of the world.

And this is what gives way to “diagnoses” of handwriting disorders, called “dysgraphia”, regardless of the fact that there is not a shred of proof of actual neurological irregularity, referred to also as neuroabnormalities (as learning disabilities are now called), when childrens' writing is illegible.

No one is taking in to account that many children and young people never had the chance to learn the correct technique for writing well, neither do they know how to correct themselves. So they regress to the point of writing in block letters.  This causes them also to revert to signing their names in block letters, even.

Another new disorder has been dubbed “dysgraphia”, which is said to affect around 20% of Italian school students, dwarfing even the statistical data for “dyslexia” (4-5%) and dysorthography (2-8%)! Resports of “dysgraphia” continue to increase and will affect not only elementary school students, but also those in secondary schools, up to university students [1]. What was once called “bad handwriting” or “illegible handwriting” is today known as this disability, whose symptoms are labeled in many cases even without a dyslexia diagnosis. Dysgraphia is defined as “a disorder of handwriting that shows a difficulty in reproducing alphabetic and numeric symbols” [2]. Difficulties that essentially concern cursive (longhand) writing: “The most evident sign of dysgraphia is a difficulty in carrying out a fluid and morphologically comprehensive cursive [3].”

The symptoms of this new “illness” or “disability” consist of a reduction in writing speed (measured in the numbers of letters written per minute or second) and in a handwriting that is not easily legible or completely illegible. In particular, “dysgraphic” handwriting shows: deformation or loss of the distinctive lines of the letters, which are rendered ambiguous or unidentifiable; disproportion between the various parts of the letter; alterations in the dimensions of the letters, which are either too big or too small; incorrect inclination of the letters; change between one type of character and to another; alternating the use of upper case, lower case, cursive, or printed figures; lack of connections between letters in cursive; fluctuation of the letters above and below the line.

What then would be the origin of a new “disorder”, that renders more than a quarter of children of the younger generations around the world incapable of writing well? According to the “scientific” theory that is accredited today, “dysgraphia” must be due to “praxic, coordination, motor-visual integration and phonological difficulties”[4]. And what would be the cause of such phonological difficulties? The theory maintains that it is a “development deficiency of a congenital nature”[5] that “belongs to the genetic heritage of the individual”[6]. Are we therefore in the presence of a mutation in the genetic heritage of the human species that deteriorates one of its most evolved functions (writing), regressing it a little at a time to the pre-alphabet stage, to pictographic and ideographic scribbling, all the way back to cave paintings?

In some respects, the writing notebooks of today’s school children seem to reflect this hypothesis. But a more in-depth analysis reveals much more.

If we look at what today's kids fill up their notebooks with, we see ever more drawings and photocopied images, copied and pasted, than letters, words and written sentences. Are we perhaps dealing with a return to representation through “pictograms”?

When we find a series of words in a school notebook, we see they are often accompanied by a corresponding image. Why? Maybe it is through these “ideograms” that children can understand the meaning of the words that he or she has written, and that otherwise they would be incomprehensible?

Copying instead of writing

From the first days of school in fact, a child copies words and sentences that he does not know, letters that he has never learned. Why do children “copy” instead of “write”?

Where does the graphic gesture end?

And what about the graphic gesture, the gesture that teaches how to draw a letter: the starting point, the direction of movement to follow, how to attach it to the next letter…?

And what about preparatory writing exercises?

Why do we not find preparatory exercises in the exercise books, with the basic shapes of cursive letters, such a rows of lines, wreaths, arches, ovals, loops…?

No help from notebooks!

Why were exercise books of small-squared paper for learning to write abandoned? Did they cancel the old format of writing notebooks, losing the parameters provided by the sides of the squares for measuring each letter and the proportions between their various parts (one square per oval, one square for each part of the n and the m, a line reaching from the top to the bottom of the square for the letter t or the letter p, etc.)? Why do children write instead on large-squared notebooks, in which each letter is placed freely inside the square, with no reference for dimensions, proportions between the various parts, inclination, detached or distant from the others?

Children learn to write in lower case printed letters. Why, when the printed letter is a character of printing and not of handwriting? This raises a series of questions. Why, if from the beginning children write primarily in lower case printed letters, are we surprised that they cannot learn an adequate “automatism in cursive”? Why do children write in printed letters, but they are diagnosed as “dysgraphic” in cursive? Why is a lack of linking between letters a symptom of “dysgraphia”, which is characterized by printing? Why is it said that children show slowness in writing, if this is a characteristic of printing, and differentiates it from cursive which, as its name suggests, “runs” and facilitates the speed of writing?

Why are children taught to write letters in four characters simultaneously: lower case printed, upper case printed, lower case cursive and upper case cursive that, when including five foreign letters as in the Italian alphabet, constitutes form a total of 104 graphic symbols? Why introduce such a huge multiplication of alphabetic symbols to a child who is just learning to write, instead of, as we have always done, the 21 letters in lower case cursive that are sufficient to write the words of the Italian language? And why then are we then surprised that a child has “difficulty in remembering and reproducing the shape of the letters”?

And that their handwriting frequently demonstrates “switching from one character to another, alternating the use of upper case, lower case, cursive and print”? Why does all of this result in “dysgraphia”? And … “development deficit” in writing? Finally, why do we speak of a “congenitive development deficit” in dealing with the ability to write? How do you think we should develop handwriting in the absence of sufficient education? Why do we go in search of alleged but never proven “praxic, perpetual-motor and metaphonological difficulties”, to explain the inevitably poor handwriting of children?