For none of the “disorders” is there:

- an objective chemical or physical test
- an exam to discover evidence of damage, irregularity, or injury in the anatomy
- any distinguishing physical indication that could characterize the disorder
- indisputable scientific evidence even of the disorder's existence

All of these disorders are "diagnosed" with nothing more than questionnaires and subjective observation.

The only tools* used to “diagnose” what is called Attention Deficit and Hyperactivity Disorder are a series of survey-type questions answered by observing the child, or asking them some questions, and responding yes/no.

In principle, any questionnaire is completely subjective and therefore can't possibly have any scientific validity. These ADHD questionnaires are no exception.

Some examples of these types of questions (taken from a prominent psychiatry site with the reference: "Based upon the DSM-5 criteria and other screening measures for ADD/ADHD") are:

How often do you have difficulty waiting your turn, such as while waiting in line?"

"How often do you feel restless -- like you want to get out and do something?"

"How often do you fidget with or tap your hands or feet, or squirm in your seat?"

"How often are you easily distracted by external stimuli, like something in your environment?"

"How many children could say no to these? And yet, enough "yes" answers to such questions would result in a psychiatric diagnosis of ADHD, by these standards." 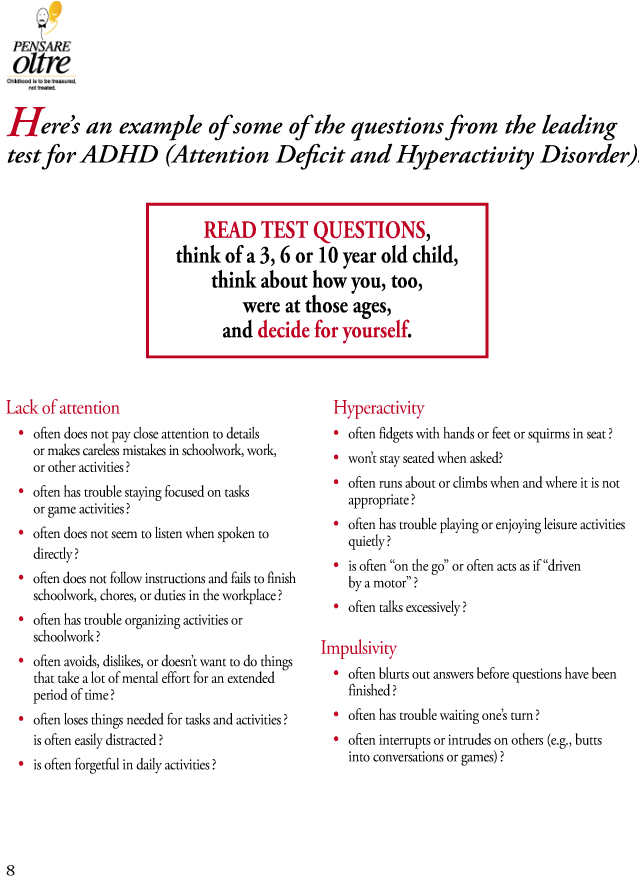 These tests are no different than the silly ones we find in popular magazines, where we answer a series of yes/no questions to determine, for example, if we are jealous, timid, perhaps "losers"--and they have no more value than these, either! These are instruments of amusement, appropriate for fun and entertainment purposes at most. Using such “means” for medical diagnosis is absurd.

* = In addition to the these questionnaires, the only other diagnostic tools sometimes used are:

1) a inane computer game called Continuous Performance Test or CPT. The child has to watch a gray screen for multiple minutes while studying sequences of numbers. If at any point he finds this boring, he is positively identified as “ill”.

2) a test called EIS or electro-interstitial bioimpedance, which uses a piece of equipment that has many serious considerations:

a) it has never been validated scientifically. It has not been proven to be able to diagnose any real pathology with consistent accuracy

b) the equipment detects changes in electrical conductivity in the subject, but based on standards set by the operators

c) the equipment only detects changes in electrical conductivity, but we do not know what significance these differences have

e) the variations which result may be normal variations in the human species, or may be the effects of any number of possible phenomena, not diseases at all

The same holds true for learning disabilities.  The diagnoses are made from nothing more than reading, writing or math tests. And although the reasons for a child's difficulty in these areas could be due to multiple explanations, all a child has to do is not fall within what has been arbitrarily deemed "the norm" among his peers' progress, in order to be labeled with a learning disorder. 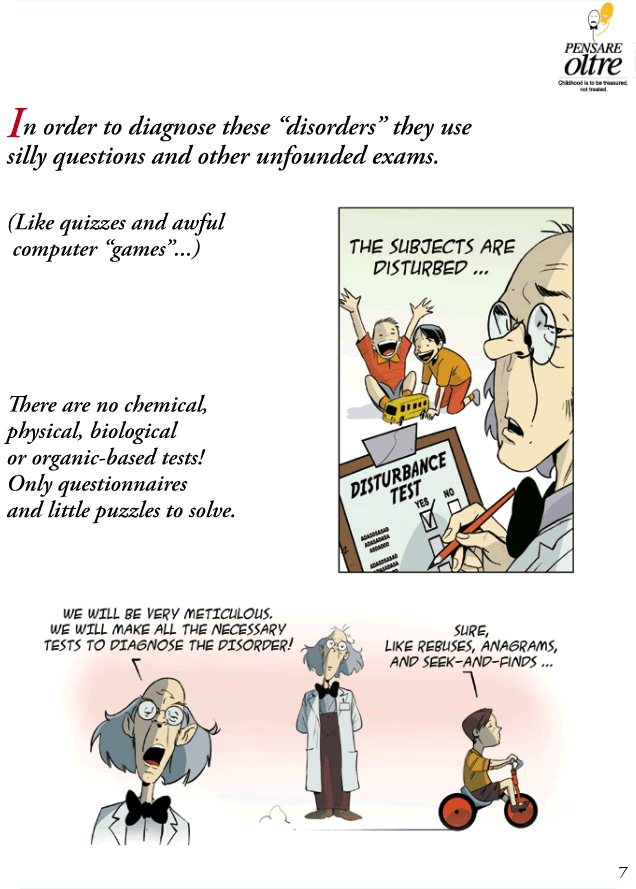