The guide line of PENSARE oltre

Disorder: to “disperse”, “confuse”, also “upset” or “bother”. The term implies a states of mind or temporary behaviors in people or environments. (Source Devoto- Oli Dictionary)

Disorder in the medical field

A generic term, unspecific, which means “a physical or mental condition that is not normal or healthy” (source: Merriam-Webster.com)

Disorder in the psychiatric field

The definition and importance of the medical term changes completely--from vague and general, it becomes a specific symptom or evidence of something precise.  This allows it to enter in to the category of mental illness.

This definition, which in the field of medicine refers to something as-yet undefined and vague, for some reason, in the field of psychiatry, assumes an air of specificity and is seen as a concrete, precise symptom, so is allowed to then be labeled as a degree of mental illness.

In this confusion of definition of terms, a mental disorder and a mental illness end up being interchangeable, even though even among psychiatrists themselves there is not a consensus. Many insist that a condition can be called an illnessonly once verifiable physical causes for it in the organism are proven.

But in the case of mental illnesses or disorders, any hypothetical physical irregularities thought to cause them have never been discovered or proven as per the rigorous criteria of real science. Whereas if someone reports of a serious “stomach disorder”, the presence of an actual physical cause, such as appendicitis or dysentery, is the verifiable source.

In the complete absence of objective confirmation within the functions or tissues of the organism itself, the causes are then hypothesized to be outside of the body, in the environment or our relationship with it.

If I am uncomfortable in a place or my homework reveals numerous spelling mistakes, I don't recognize that that discomfort comes from related situational issues (in groups, at school, with my family, etc), but I am lead to assign the cause to something faulty in the body—even though an actual “ailment” to link these to within the organism won't be found.

If, for example, a child acts out, or acts “abnormally” within his environment, his school, among his peers, or elsewhere, it is now called a mental disorder. This is a way of lumping everything under a vague, definitionless, catch-all umbrella, because there is no verifiable physical injury or malfunction to speak of. 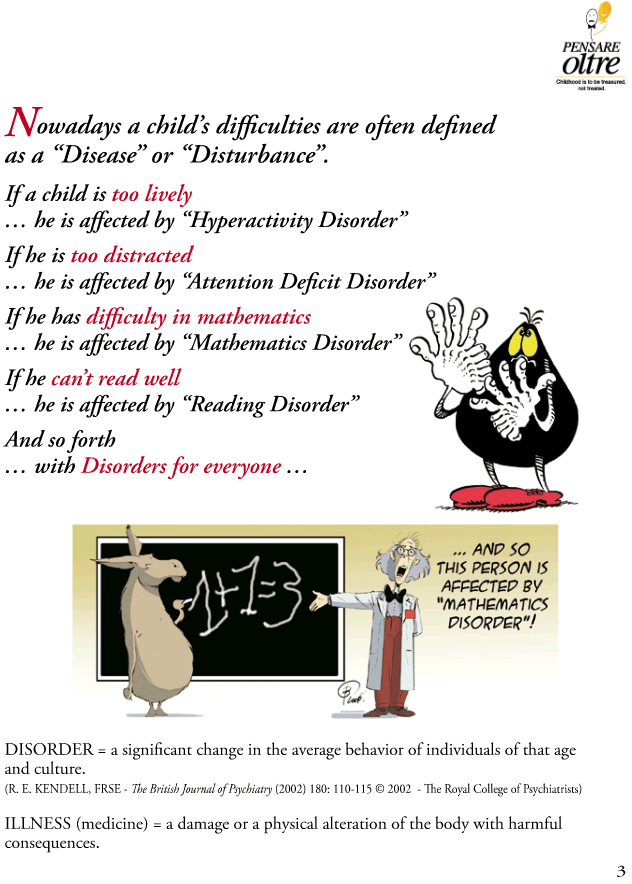 In the field of medicine, “disorder” is a ambiguous, generic term, that means “slight irregularity or interruption in organic function”. In the field of psychiatry, these are called mental disorders.

However, some writers maintain that it can be deemed a mental “illness” only when precise organic issues are able to be identified as the cause (even though, in the case of mental illnesses or disturbances, such causes have never been conclusively proven through adherence to rigorous scientific principles).

The most famous psychiatric text is the Diagnostic and Statistical Manual of Mental Disorders (DSM): the title itself refers to disorders, and not illnesses. The very word, “disorder”, tells us that, according to those that support this theory, there must be some precise mental “order” one must adhere to, and so anyone who departs from this must be the victim of a “disorder”.

We are speaking then of perceived departures from the average population's tendencies, with regard to specific behavior or ability.

In the DSM you will find any and every mental disorder, from schizophrenia to hyperactivity, from depression to learning disorders. As per learning disorders, many journalists and experts assert that these are true, bona fide, pathologies.

There's just one little problem: in order to be appropriately defined as “a pathology”, it's necessary to demonstrate a specific organic origin (damage, injury, physical malformation). A valid diagnosis should be the result exclusively of the identification of a conclusive, physical finding of this sort.   By definition, a “pathology” can be deemed such only with this demonstrable certainty, and is not reliant on behavior, difficulty, symptoms, or that which “appears” or “seems”. In fact, so much are the two concepts of pathology and symptoms unrelated, that in proper medicine, pathologies are regularly identified and diagnosed, even when completely without symptoms.